skip to main | skip to sidebar

If things have seemed quiet it's because I've been having way to much fun lately to be sitting around on the computer.

On April 7th we arrived at Hill Shade RV park in Gonzales, TX enticed by the amazing monthly rate and the upcoming rally for the nomadic group NuRVers. The really great part was we would be spending the whole month with some great people and fellow full-time travelers.

The first to greet us was the famous Happy Janssens formerly of the Live Lightly Tour. Chris, Nora, and I were invited to join Bella's (their now 6 year old daughter's) birthday celebration going on as we arrived and chatted with Matt, Sara, and her parents who had come for a visit. That night we joined them in a camp fire, it gave us an instant sense of community warmth.

A few days later we saw the arrival of Tara Wagner of the blog Organic Sister, with her husband Justin, and son Zeb and so our little neighborhood of nomadic, unschooling (that's right all of us are unschooling, Yay!), young families was formed.

Over our time together we shared meals, cars, campfires, conversation, the children played, and played. Nora learned to ride a bike with training wheels and jump on a trampoline helped and encouraged by the other children. We made hula hoops, learned hoop tricks together, shared ideas, and inspired and encouraged each other.

At one point Jennie, James, and their daughter Valentine also joined the mix as they passed through Texas on their way back home.

Once the rally began we were joined by more nomads and nomad families (all unschooling) but I'll be doing a separate post on the rally. I'm still processing my thoughts and feelings about this past month and there will be more to come about our experiences here.
Posted by becky or chris at 9:13 AM 2 comments:

The month of March involved a rather uneventful stop in Mobile, Alabama and than a very favorite city, New Orleans. I love spring in New Orleans and it is becoming a tradition for us to spend our Easter Holiday here. 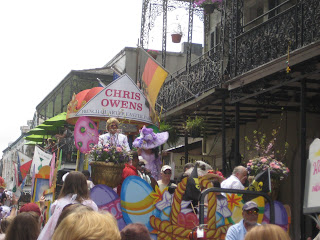 We have great friends here, Joanne and her husband Dan always make us feel like we belong in this crazy town and this year they invited us to join in Easter dinner along with neighbors and friends. It was a real southern feast with fried chicken, cheese macaroni, potato salad, and lots of other homemade goodies. Here is Nora helping Joanne sell her NOLA GIRL tees at a local music fest. 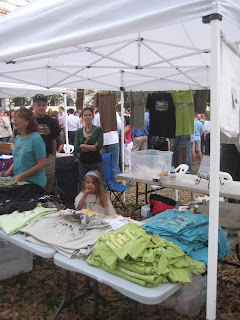 This year we did the Haunted History tour, something we missed doing last year and it was so much fun walking around the French Quarter at night hearing all the local legends. This is one of the original wood houses that survived the second fire in the city back in the late 1700's. 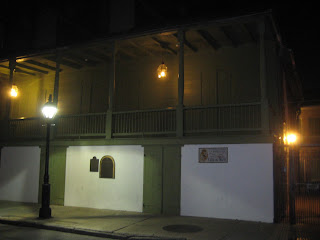 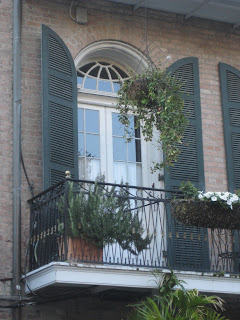 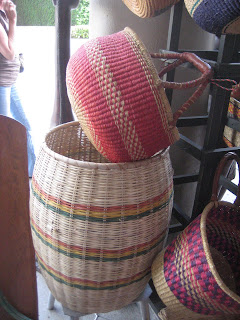 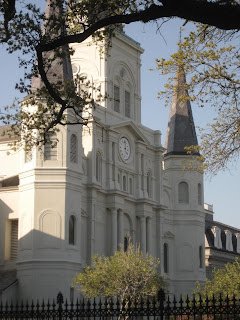 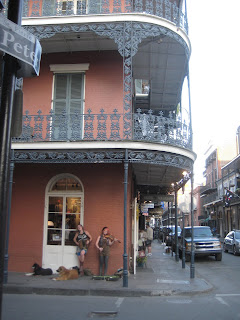 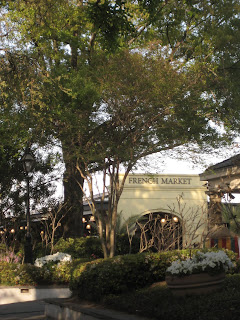 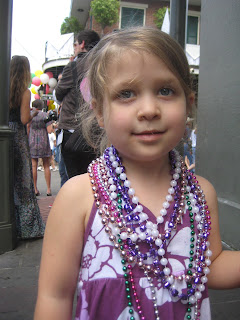 The Everglades and Keys

On our last couple weeks in Florida we stayed in the Fort Myers area, from there we took a day trip through the everglades and down about half way into the Keys. We stopped somewhere in the everglades to give Nora a chance to stretch her legs and have a rest from the car. We ended up at this great little museum with some displays about the local animals and how to identifying them. 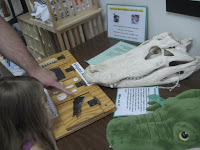 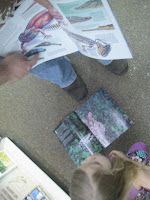 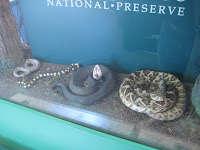 Outside was an alligator viewing area along the river, we must have seen at least 10 alligators swimming or sunning themselves. Some of them were quite large. 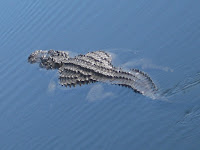 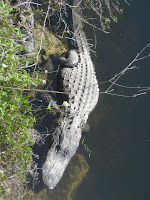 Our first stop along the keys was this little park called Harry Harris. It had a really nice playground and swings. 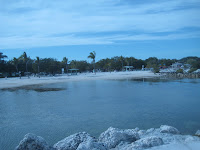 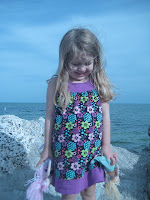 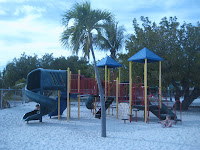 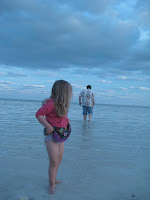 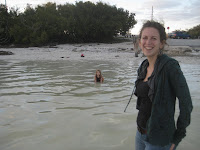 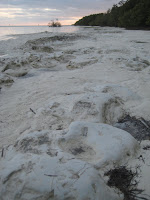 This ( above ) is Anne's beach and it became a definite highlight of the trip. It was just a tiny beach of coral that we had all to ourselves. I was very glad I had extra clothes in the car for Nora; she was soaked from head to toe by the time we left.
Posted by becky or chris at 1:56 PM 5 comments: 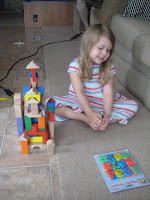 Some days are just so beautifully average.

The modern nomadic life suites my conflicted and contradictory personality so well I'm not sure I'll ever be able to fully commit to a life lived in one place again. I have a real need to see the land that surrounds me, the places I feel well beyond me, and I love being taken from any known element and seeing a world of wonder laid sprawling before me. I love returning to places I've know and seeing them with new eyes.

Then there are the days when I feel that mild agoraphobic need to stay hidden, and not go anywhere. How lucky am I to have both the safety (however imagined) of my little house on wheels and the freedom to move that satisfies the courage and creativity of my spirit.

Today Nora and I spent some time outside painting. 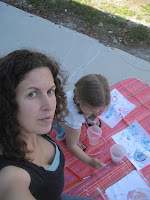 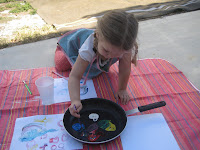 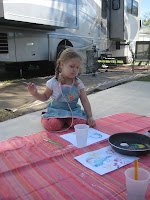 Here is a funny little painting I did of Nora. 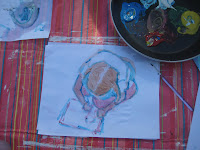 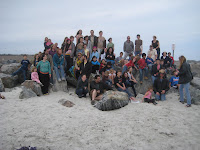 I have recently had lots of opportunity to observe home schooled and unschooled children of various ages for an extended period of time. In January we attended a Rally for a group of families who travel full time like us in RVs and a lot of those families have been in the Florida area with us (many at the same campground) for some time now. I'm impressed, very impressed in fact with the way they conduct themselves both with adults and each other. There is a difference here in that they have a broader more natural honest sense of community I think.
We had a get together with three other families at Fort Wilderness (Disney's campground) at one point that included 4 yr. old Josh, Nora ( also 4), Akira 10, Luka 13, and Lauren 13 (I think). All the kids got along so well no matter their age or gender. There were no battles for toys or awkward group dynamics leaving anyone left out. The older kids helped with the younger ones gladly but also communicated with great maturity when something was outside a level of comfort or ability.
Here at our current campground there is a group of 5 boys aging in range from about 9 to 12 as well as some teenagers, Nora, and 6 yr old Mia. Nora and Mia have been playing together and are joined on occasion by Mia's older brother Adam who is 11. Adam has great patience with both girls and will play house and kitchen without complaint and seems to enjoy it as much as the girls. He is very social and talks easily with me or Chris. Many of the boys will drop by during the day to tell or show me something even though I have no kids that are their age. When they see Nora they stop and talk with her, asking her questions and paying great attention. They all brought her Valentines and when she brought them a drawing all 5 boys took the time to examine it and tell her how cool it was. Adam came over with Kelby to show me 2 teeth he had lost yesterday, I said "wow, that's really gross guys". They laughed and Kelby told us how his Mom won't even look at teeth.
I've really enjoyed getting to know these kids, they have been so easy to talk with and so responsive. They are enjoying being around each other but they enjoy the adults too.
Posted by becky or chris at 7:38 AM 6 comments:

We picked up our motor home in Buffalo NY on July 1, 2008 a 2009 Forest River Georgetown SE 350 TS bunkhouse and I thought I would share some of our earliest photos of life in our new home.

Here is nore enjoying one of her first meals in the RV.

This is Burlingame State Park in RI on our first camping trip. Nora is two here.

We camped near my Uncle and his girl friend who also full time and my parents came also for dinner and a campfire. You can see my Uncle's Safari in the background.

This blog is long overdue as we have been on the road full time for over a year and a half but it's poring rain right now and so it seemed a good time to finally get this project underway. Nora is my main purpose for creating this blog, as a way to document our life, the places we have seen and the people we have encountered across this beautiful land. Living this way, time seems to move past so quickly for us and I want to give her a way to look back at her childhood, her education, her parents, and all we've created together.
I have some catching up to do, so I'll be posting some pictures and stories from our past travels as well as our current adventures.

Follow Chris, Becky, and little Nora as they travel around the country in a class A RV.